Our team in York have been celebrating the 2nd anniversary of the charity’s Autism Hub which provides support for some of the most vulnerable people in the city.

United Response has been celebrating the second anniversary of its Autism Hub in York which provides support for some of the most vulnerable people in the city.

We have been supporting people with autism and their families to help them live their lives to the full. The charity opened its Autism Hub on 3rd October 2016. It currently supports up to 10 people every weekday from 9am to 4.30pm.

The Autism Hub, based at the Energise Gym in Cornlands Road, is a safe and comfortable environment for people to learn new skills, have fun and boost their confidence. Support is tailored to each individual’s needs.

Charity staff celebrated the anniversary by hosting a party with people they support and their families and later had a music quiz.

York-based United Response service manager Joe Smart said: “We’re thrilled to be celebrating two years of doing our very best to help those with autism live happy, positive lives. We try to do everything that is reasonably possible to enable them to learn new things which can improve the quality of their lives.

“The numbers are huge. We believe it’s important to recognise people with autism, Down syndrome and other learning disabilities as valued members of society. We have to be inclusive and do all that we can to empower people.” 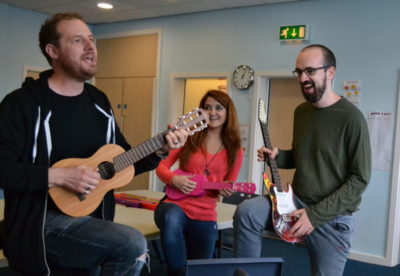 Rachael Read, aged 33, who has autism and is supported by the Hub, said: “I think that The Hub is good. We do lots of different things such as crafts and computer work. I learn new things and meet new people.

“And we go on trips. My favourite trip was The Deep. The staff support me with what I want to do.”

Robin Simpson, also supported by United Response, said: “I think that the Hub is a great place to go to. I enjoy hanging out with my friends at the Hub, especially as it makes me happy.”

Andrea Simpson, a United Response support worker at the Hub, said: “We’re all about building up people’s confidence and offering new opportunities and new ways of looking at things.

“For example, by showing the people we support how to use an iPad, they can then search music, buy things online and generally be more independent. It’s absolutely amazing to see that transformation and that is all from people coming to The Autism Hub.

“You can see such a difference which just makes everything worthwhile. Some of the people we help are now able to express their own feelings and say how they feel about things. But they wouldn’t have been able to do that before, they would have bottled all of that up and now they feel happy enough, confident enough, and able enough to explain how they feel.”

For more information about United Response and its work supporting people with disabilities in York, visit www.unitedresponse.org.uk/york-autism-hub.

All referrals to The Hub are made through the City of York Council learning disability team. Service users can attend for as much or as little as they would like but are charged a daily fee to attend. The cost is assessed by social services.